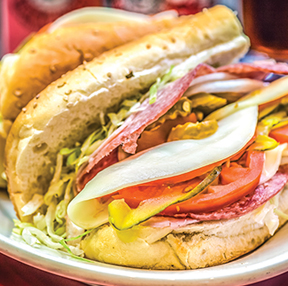 For centuries, the humble sandwich has been a favorite food of people around the globe. Throughout their existence, sandwiches have actually been part of some pretty incredible stories. As you read this guide, you’ll discover just a few unbelievable facts about sandwiches you probably didn’t know before.

America’s most popular sandwich is PB&J

In the United States, people’s favorite sandwich is peanut butter and jelly. In 2011, 30% of the adults surveyed in an American study indicated that PB&J was their favorite sandwich. This is evidenced by the fact that the average U.S. resident eats nearly 3,000 of these sandwiches in his or her lifetime.

In the study, BLT sandwiches took second place, with 17% of the respondents’ votes. Also, in this poll, 51% of people preferred sandwiches to any other lunchtime meal. This goes to show how ingrained in American culture sandwiches really are.

Details about the most expensive sandwiches on earth

Serendipity in New York City sells the priciest sandwich in the world. It is a $214 grilled cheese concoction, consisting of French bread (baked with Dom Perignon and real gold flakes) and a rare Italian cheese called caciocavallo podolico. Truffle oil is drizzled on top of the sandwich after it is pressed in a panini press.

Understanding why sub sandwiches are oblong

There are several potential reasons why sub sandwiches are shaped the way they are. The most popular lore indicates that they are fashioned after submarines because dock workers would famously bring them to work on the East Coast of the United States, specifically the Philadelphia region.

Dozens of types of sandwiches come from the United States:

The United States, where over 300 million sandwiches are consumed every day, residents aren’t just fans of eating this food, but also of inventing various styles of it. As a matter of fact, over 60 popular sandwich types originated in America. American subs, BLTs, pimento cheese sandwiches, and ham and Swiss sandwiches are among the most famous varieties.

These are just a few of the dozens of fun sandwich facts you can discover by doing just a little research. Hopefully, this has spurred your interest in the fascinating history of sandwiches and you will find yourself discovering more about this food that most Americans eat at least once per day!

At NY Deli, we have many sandwiches available that are perfect for breakfast, lunch, and dinner! Enjoy the Egg ‘N’ Cheddar, Ham ‘N’ Swiss or the Breakfast BLT. For lunch, join us for a Tuna Melt or the Caprese. If those don’t tickle your fancy, opt for our Veggie, Ham ‘N’ Swiss or other options.